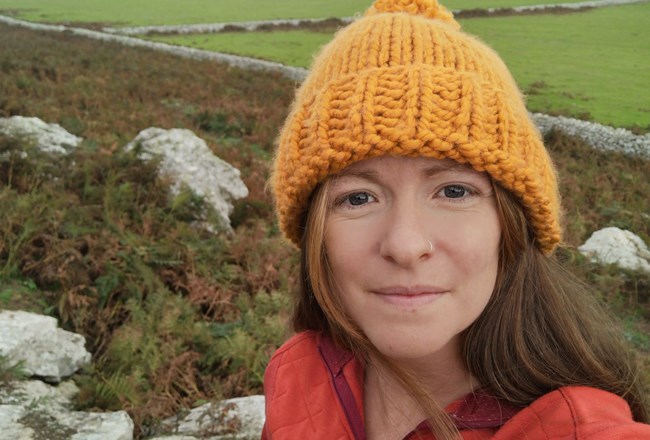 Today RSPB Cymru have launched their Cynnig Cymraeg (Welsh Language Offer) the Welsh Language Commissioner's recognition to show that the charity has reached a particularly high standard in their Welsh language service to the public.

Nia Stephens, originally from Cardigan, works for the charity as a warden on Dewi Island, near St David's, Pembrokeshire and is pleased to be able to use the Welsh language in her everyday work. The Island is owned and protected by RSPB Cymru, and two wardens shepherd the island for nine months a year.

"The Welsh language is very important to the RSPB Cymru, and to me" said Nia, who is originally from Cardigan area. "It is important that we have an RSPB that represents Wales. A lot of Welsh speaking staff work for the charity. I send a lot of e-mails in Welsh. I translate the Island social media messages to Welsh; we do everything in Welsh and English, I think that's very important."

Nia first visited Ramsey Island at the age of twenty, and instantly fell in love with the place.

"Working here is a dream, it's such a privilege for me to call the Island my home" says Nia, who guides visitors on tours around Ramsey Island, which takes place regularly during the spring and summer season.

"When the boat comes in, I always welcome them to the Island in Welsh with a ‘croeso,’ and introduce myself in Welsh. At least then, the people who speak Welsh know that I can speak the language, and they speak Welsh to me all day afterwards," says Nia who lives on the Island from March to November.

"I think people can almost always work out that I speak Welsh, and then they can speak Welsh with me about the wildlife. It makes a difference to their day."

Some of Nia's daily tasks include; research on wildlife, shepherding, and conservation work on the island.

"I feel shocked all the time when I meet people from St David's who have never been to Ramsey Island," says Nia, who says that most of her visitors from Wales have come from Cardiff and Anglesey this year. "I believe the Welsh language gives visitors a better experience. It's hard to explain why, we'd be the same, you feel more comfortable. It makes you feel, like you're part of something. It’s makes a difference."

"I would like to congratulate RSPB Cymru on their Cynnig Cymraeg (Welsh Language Offer). I also have to congratulate Nia, for improving the visitor experience, and for promoting the language to visitors beyond Wales. We look forward to working with the charity further in the future, and wish them well, in developing their Welsh Offer."

"It’s been a pleasure to work with the Welsh Language Commissioner over the last few months, and we are extremely pleased to receive the Commissioner's approval of our Cynnig Cymraeg (Welsh Language Offer). As a charity operating in Wales, we are passionate about serving the people of Wales fully bilingually.

"As part of the Cynnig Cymraeg scheme, we will work to ensure that we communicate with our supporters and the public bilingually at all times, whether through the inclusion of blogs and social media for signs in nature reserves. The scheme will further strengthen our commitment to implementing and serving the people of Wales in both languages."

The Welsh Language Commissioner will celebrate Welsh Language Offer day on Thursday, 27 January. If you think your charity or business offers a great Welsh language service to the public, we would like to hear from you: hybu@cyg-wlc.wales.