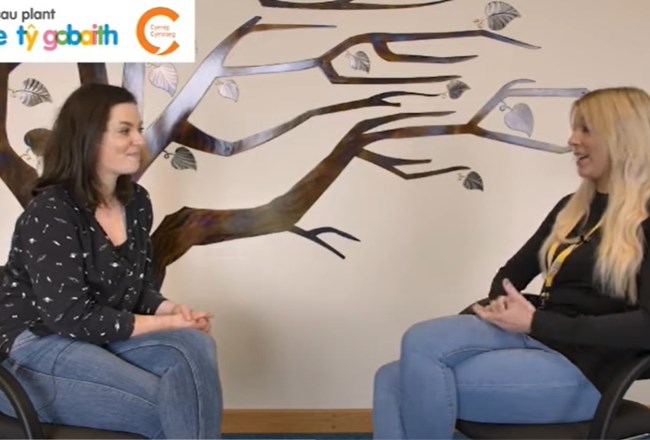 The Cynnig Cymraeg (Welsh Language Offer) is the Commissioner's recognition of businesses and charities with which he has worked to develop the use of the Welsh language. Tŷ Gobaith in Conwy is the first healthcare provider to be awarded this recognition, thanks to its extensive and vital work in being able to offer specialist healthcare to the families and seriously ill children who use its services in Welsh.

In the launch, Eisteddfod viewers heard from a family who use Tŷ Gobaith services, and learned how the charity has ensured the use of Welsh in its day to day work.

Kelly Hughes, fundraiser at Tŷ Gobaith, said: ‘Tŷ Gobaith is a local charity and using Welsh is vital for us to feel close to our communities.

‘We have families from both North Wales and Mid Wales, and many of them are Welsh speakers. We strive to ensure that Welsh-speaking carers and nurses look after those families.

‘The Cynnig Cymraeg from the Commissioner is a way of showing that we are committed to offering a Welsh language service to the families who come here.”

Bedwyr Davies is a six-year-old boy from Llanrwst who has a rare genetic condition, Coffin-Siris Syndrome, which causes significant learning and health difficulties.  Being able to offer services in Welsh from Tŷ Gobaith is of great value to his family.

His mother, Nerys Davies, said: ‘Bedwyr goes to the hospice for a respite four times a year, and we as parents and his brother also rely on Tŷ Gobaith for advice, support and counselling. All support takes place through the medium of Welsh. Welsh is the language of our home and the language of the school, and so having that consistency in the language is crucial for Bedwyr when visiting Tŷ Gobaith. It is also important for us as a family, and easier for us to express ourselves and our concerns in our first language, especially when discussing difficult and matters very close to our hearts.'

Awel Trefor, Hybu Officer with the Welsh Language Commissioner, said: 'The Cynnig Cymraeg enables businesses and charities to let service users, volunteers and customers know exactly what is offered in Welsh. We plan and work with organisations to help them create a Welsh language development plan and set targets. Organisations can submit their Cynnig Cymraeg to us for official recognition and then they can use the Cynnig Cymraeg logo.

'The reason for holding this session as part of the Eisteddfod AmGen is to bring people’s attention to Tŷ Gobaith’s work and to the importance of providing healthcare services in Welsh. We also want to encourage other charities to work with us and to develop their own Cynnig Cymraeg.'

Contact the Welsh Language Commissioner's Hybu Team for more information on the Cynnig Cymraeg for businesses and charities.